Terrific Podcast about Angels, and Even a Great Song

Posted on September 18, 2018 by danielleegnew 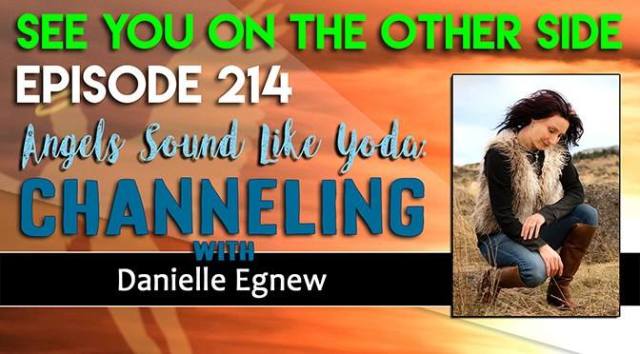 This is a FABULOUS show, and I was graced to be a guest!

See You On The Other Side Podcast is all about paranormal phenomenon, and hosted by a paranormal-hunting musician, Mike Huberty , who, with his fantastic band mates including Wendy Lynn Staats, write and record an original song after the interview, BASED on the interview we did!

Now, for those who don’t realize how much work all that writing-recording-mixing is, on *top* of producing a great-sounding podcast — it’s A LOT of work!! In fact, as a musician, that very time-consuming fact keeps me from chewing into producing more recorded material. I’m very grateful to Mike Huberty not only for a REALLY fun interview, yet for the talent and time that he and his band mates put into the song.

Music is such a channeling exercise, and all of we musicians are channels. The song Mike and Wendy wrote actually choked me up

:). Mike cited a piece of our conversation that caught him during the interview. This piece inspired the song:

“I think that the most interesting thing that Danielle said to me is that human spirits are basically good, it’s the machinery of the body that’s broken. So there isn’t any Hell really. We have a second chance the next time around, even if we’re evil, even if we’re mentally ill. Even if there’s some kind of imbalance, we are capable of being forgiven.

That reminds me of the legend of Tannhäuser, someone who the Pope said his staff had a better chance of growing new leaves than of God forgiving him. Well, what happens is that the staff ends up blooming, but it’s too late. No one is beyond redemption, no one is unworthy of forgiveness if they are penitent.

LYRICS:
Words and music by Sunspot

Oh, bury it with me

Check out my interview on the podcast, with a great blog summary of the interview here, and take a listen to these talented musicians!

Thank you Mike and Wendy for such a fantastic experience, and I love your tunes :)!

Named "Psychic of the Year" by UFO's and Supernatural Magazine, Danielle Egnew is an internationally-known Psychic, Medium and Angelic Channel whose work has been featured on national TV (NBC, ABC, TNT, USA) as well as in the Washington Post and Huffington Post. She has provided content consultant services for the CW's hit series "Supernatural" and the blockbuster film "Man of Steel". Danielle is also an author, teacher, and TV / radio host in the field of metaphysics. She anchors her private practice in the Big Sky Country of Montana, residing with her wife and their daughter.
View all posts by danielleegnew →
This entry was posted in Psychic Phenomenon and tagged am i going to hell, angels, ascension tour, death, do people go to hell, dying, Ghost, mediumship, mike huberty, music, paranormal, paranormal music, podcast, Psychic, religion, see you on the other side, wendy lynn staats, what happens when we die, what is hell. Bookmark the permalink.